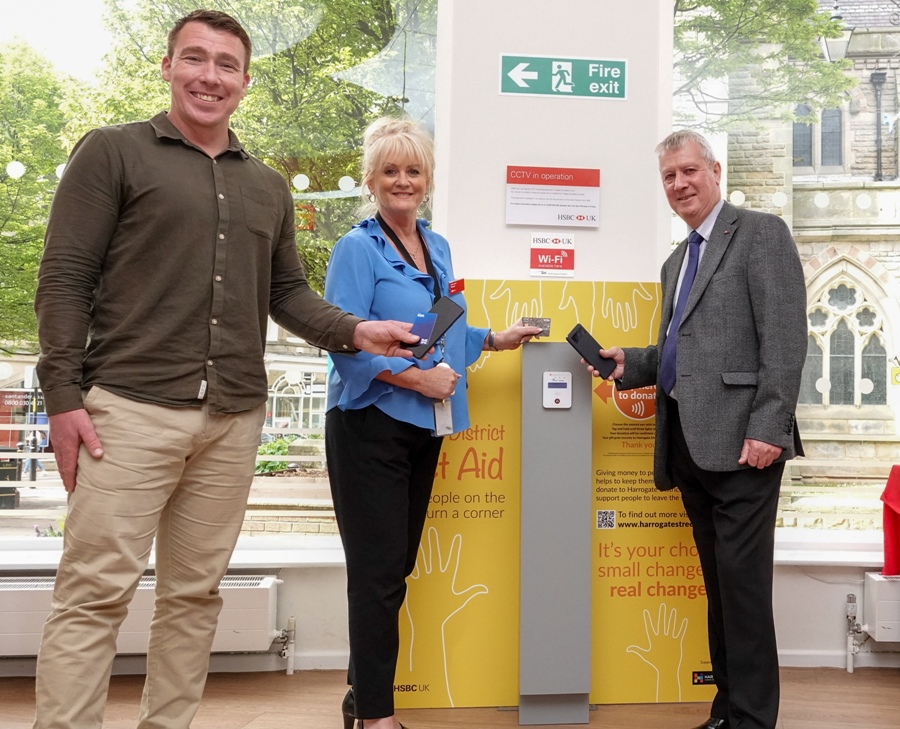 An initiative to help some of the most vulnerable in Harrogate get back on their feet has been boosted by Harrogate BID and HSBC.

This week, a third Street Aid tap terminal has been installed in the bank’s Cambridge Street branch, where customers can ‘tap’ their phone or credit card on the terminal to make donations ranging from £3 to £20.

Following research conducted by Harrogate Borough Council, North Yorkshire Police, Harrogate Homeless Project and North Yorkshire Horizons, the scheme was launched in October 2019 with the first terminal being installed in the Oxford Street window of M&S.

A second terminal was unveiled in Victoria Shopping Centre last July, and thanks to Harrogate BID and HSBC, a third has now been added.

Together with online donations, which can be made at www.harrogatestreetaid.co.uk , and fundraising events held by HBC staff and other organisations, more than £20,000 has been raised.

The funds are administered by Two Ridings Community Foundation, and to date just short of £10,000 has been given in grants to support 28 individuals with items ranging from fishing equipment and fishing licence, furniture, gym membership, bikes and clothing.

The first grant – a forklift truck refresher course, training and licence – was awarded in July 2020.

Mike Chambers, Harrogate Borough Council’s Cabinet Member for Housing and Safe Communities, said: “Harrogate District Street Aid is in its third year, and we are delighted that Harrogate BID has worked with HSBC to secure a tap terminal in the bank.

“A lot of partnership work is involved with Harrogate District Street Aid and supporting those who find themselves on the streets in the Harrogate district. It is great to see businesses supporting this multi-agency approach to making real change and getting people off the streets for good.”

Harrogate BID Manager Matthew Chapman said: “We are delighted to throw our weight behind the Street Aid scheme, which helps those who are genuinely in need get back on the feet.

“We want Harrogate to be known as a friendly, caring, welcoming town, but not a town that is a haven for known professional beggars. Street Aid takes cash off the streets and as such helps funnel it to the right channels.

“I’d like to thank HSBC for partnering with us and having the third Street Aid tap terminal in their Cambridge Street branch foyer.”

Linda Lewis, HSBC Senior Network Manager, said: “It’s our pleasure to be part of this scheme and house the third Street Aid terminal. Since its installation I’ve seen a number of customers tapping it with either a card or a phone to make a donation.”