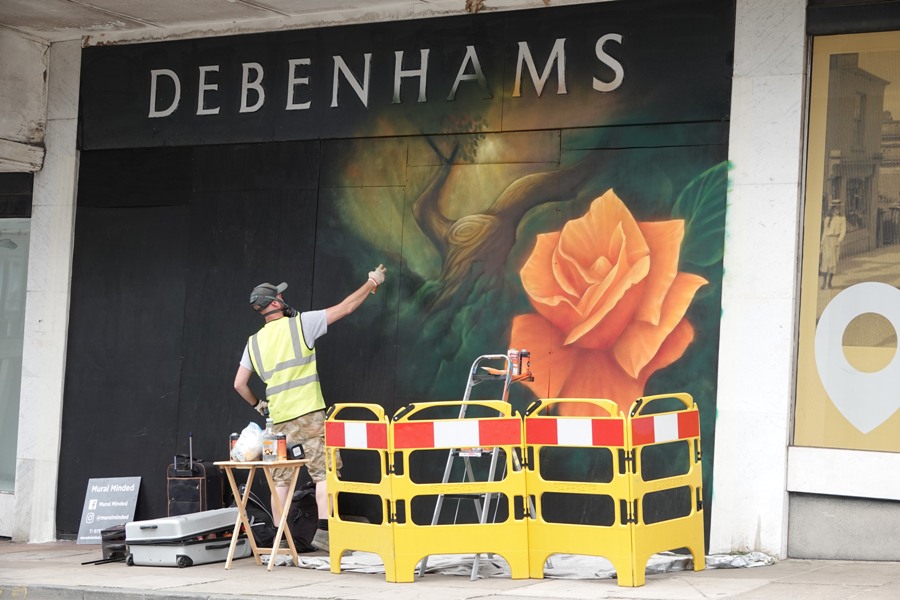 A street artist whose stunning mural transformed a drab alley in Harrogate town centre is back working his magic on the former Debenhams story.

Last week, Sam began work on the first doorway, and when both finished will each carry colourful images of flowers, and in turn are a perfect fit with the BID’s Floral Summer of Celebration.

Being held between July 15 and August 12, the town centre will become home to a floral trail featuring eight unique displays, a shop window competition and an exhibition in Victoria Shopping Centre looking at different aspects of Harrogate’s floral history.

Unlike the Cross James Street mural, which was painted directly onto the wall, the designs at Debenhams are being created on wooden boards, which can be moved and displayed elsewhere.

Harrogate BID Manager Matthew Chapman said: “The former Debenhams shop is one of the most prominent buildings on Parliament Street.

“Last year, it benefited from a number of our ‘well-known windows vinyls depicting famous people with a connection to Harrogate.

“Because it has stood empty for a while now, and has had its doors boarded up to stop people from sleeping in the recesses, we have asked Sam to work his magic here.

“He’s an incredibly-gifted artist, his murals are stunning and will help give this building a welcome burst of colour, one that fits in with our Floral Summer of Celebration.”

It is expected the work will be completed next week.