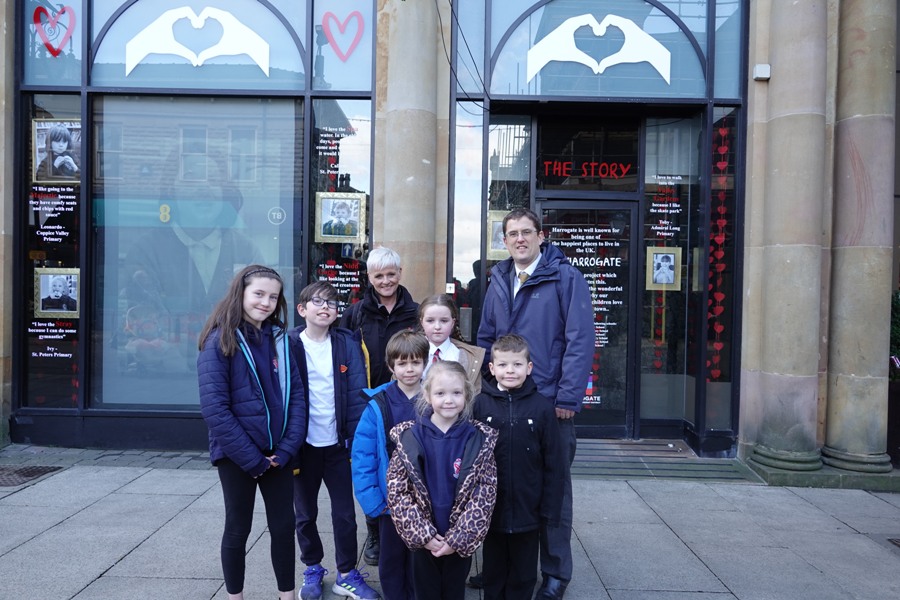 Children from six Harrogate schools have spoken from the heart whilst helping to make a new video being premiered today to promote the town.

The youngsters from St Peter’s, Coppice Valley, Birstwith & Admiral Long, Oatlands, Richard Taylor, and Western, take centre stage in the Harrogate BID-funded ‘I Love Harrogate’ film, which from Wednesday is being projected onto the window of an empty Cambridge Street shop, located opposite Beulah Street.

The 15-minute film will be screened exclusively in the town centre through the February half-term holiday – which includes Valentine’s Day – until Wednesday, February 23, when it will then be posted on Harrogate BID’s social media channels.

The aim of I Love Harrogate is to capture the innocence and imagination of our young Harrogate community, which will give everyone a positive and uplifting experience, and in turn give the town centre a greater community feel. It will also give families and schools in Harrogate ownership within the town centre.

To screen the film, the organisation has temporarily taken over the unit, which has been creatively dressed with an I Love Harrogate and Valentines message to add a sense of theatre for the screenings.

Paul Griffiths, Head of St Peter’s Church of England Primary School, situated in the heart of Harrogate town centre, said: “We were delighted to be invited to contribute to this video, and our children really enjoyed saying why they love Harrogate.

“We are very fortunate to live in Harrogate, and even luckier that our school is in the middle of the town. On our doorstep we have The Stray, The Library and its gardens, and of course all the great shops, restaurants and entertainment venues, all within a short walk.”

Matthew Chapman, Harrogate BID Manager, said: “The I love Harrogate video is the first in a series of films that we are making with those who live and work in the town. It is also a reminder that for many years Harrogate has been held up as one of the happiest places to live.

“I’d like to say a big thank you to the schools, and of course the pupils themselves, for their help in making our first one.

“I love Harrogate will be shown on a continuous loop in the window of the empty shop unit, and we hope those who star in it will encourage their family and friends to come into town to view it, and of course to take the opportunity to shop, eat and drink.”