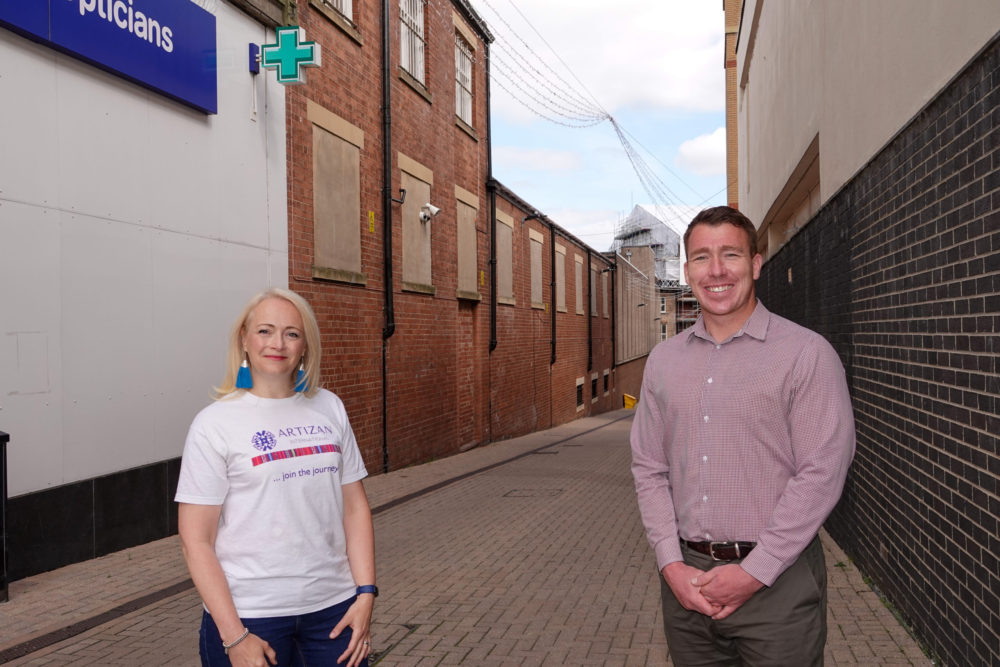 Harrogate residents and businesses are being asked for their ideas to help give a drab town centre pedestrian cut-through a colourful makeover.

Harrogate BID (Business Improvement District) is working in partnership with Oxford Street-based charity, Artizan International, to install eye-catching mosaics in the nine, blocked out windows, on the side of the Boots building, on Cambridge Place.

Whilst each window space will feature a Harrogate letter, the two organisations are asking those who live and work in the town to give inspiration to the individual backgrounds.

Harrogate BID Manager Matthew Chapman said: “Cambridge Place is an extremely popular pedestrian cut-through between Cambridge Street and Oxford Street, yet one of the drabbest in the town.

“Now, in partnership with Artizan International, we want to give this street a real lift by installing nine colourful and eye-catching mosaics in these nine blocked out windows.

“Whilst each one will feature an individual letter to spell out Harrogate, we are asking for suggestions to create the individual backgrounds. The only proviso being it must be representative of the town itself.

“This could be its spa heritage, iconic buildings, or famous names and businesses associated with the town. We will leave it up to individuals, then choose nine different ideas.

“These will then be turned into mosaics by the Artizan International team, giving this much used thoroughfare a real splash of colour.”

Artizan International Founder Susie Hart MBE said: “We are delighted to be partnering with Harrogate BID on this project, which will help brighten up this part of the town centre.

“I’m really looking forward to receiving the different thoughts, then having our wonderful team create the nine different mosaics.

“In addition to the suggestions, we are also requesting donations of brightly-coloured crockery that help bring these designs to life.

“Harrogate is a very special town, and these nine mosaics will not only give a real lift to this particular area, but make it even more special, and one that people will want to see and photograph.”

Ideas can either be emailed to Harrogate BID at info@harrogatebid.co.uk, or left with Artizan International, at their shop located at 39 Oxford Street, Harrogate. The closing date is Friday, July 2.