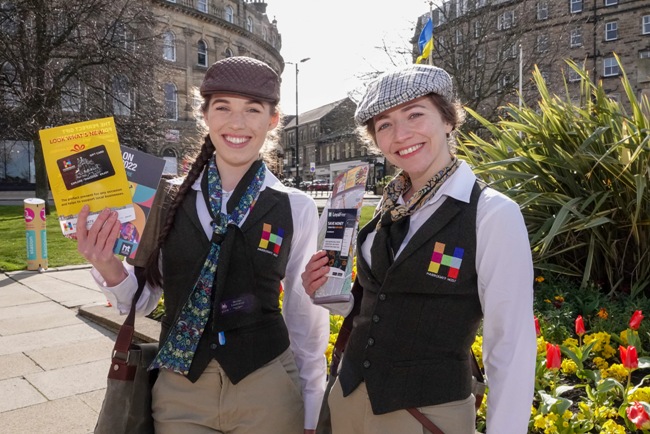 Two ‘Harrogate Hosts’, whose aim is to make the town centre a more welcoming and pleasant place to visit, have made their on-street debut.

In total there are four Harrogate Hosts, and two will be in the town centre on most weekends up to Christmas. They will also act as an additional pair of eyes and ears, alerting the relevant authorities to any incidences such as antisocial behaviour, cleansing or any issue that doesn’t show Harrogate in a positive light.

Abigail and Rebecca’s first day coincided with the appearance of the Pete and Ged Moss, the first of three different sets of performers who will entertain shoppers over the Easter holidays.

Harrogate Bid Manager Matthew Chapman said: “It is great to welcome Abigail and Rebecca to the Harrogate BID team, as we continue with our goal of making Harrogate even more welcoming.

“The pair are wearing specially made outfits of Yorkshire tweed featuring the Harrogate BID logo so people will know who they are representing. And like Business Liaison Officer, Jo Caswell, and Town Centre Ranger, Chris Ashby, I know they will become familiar and recognisable faces.

“They have been funded through the Government’s ARG grant, and their primary role is to be a two friendly faces, ones that visitors can approach if needing information about the town. They are also there to keep an eye on the town!

Matthew added: “The arrival of our Harrogate Hosts also saw the appearance of Ged and Pete Moss, the first of three town centre Easter entertainers.

“Their appearance gained plenty of traction on social media with some fantastic comments and great photos.

“I went around the town with them, and saw the way they delighted the queue outside Bettys, and how they interacted with children, families and couples, bringing entertainment, enjoyment and a smile to people’s faces.”

On Good Friday it’s the turn of Enchantica and The Easter Bunny, and the following day, Easter Saturday, Harrogate plays host to Val & Halla!